I’ve hit that point. I want to be done. The more I think about it, the more I realize that’s a good thing. I’m no longer trying to get away from anything and I really want to go home.

It probably doesn’t help that I’m so close geographically to my home. I can feel it. I know I probably only have a few days left.

I am currently in Santa Maria California which is just south of San Luis Obispo.

Yes, yesterday I did not do a blog post, and I didn’t make up for it this morning. That’s a first. I thought about it but then I realized that once again I had nothing to report. I got my massage and then by the time I had lunch, it was close to 2pm. I didn’t really want to be on the road that late and so I went out to dinner with the in-laws and spent another night with them.

An easy morning this morning. Said my goodbyes, grabbed a coffee and jumped into late morning traffic heading into San Francisco. Traffic is so easy when you can split lanes. Like, life altering easy. If I ever lived in a city with a work commute, I’d get a little motorcycle just for that reason. Lane splitting on a big Harley is a very interesting experience. I am finding myself calm in traffic and even though I can still get upset at drivers, I’m able to keep it in check.

My whole day has essentially been spent on highway 1. It has been a beautiful ride, in places, but the joy of the road is gone. What I mean is the road isn’t fun or interesting. The swoops and curves are all but gone. Plus, it being a Friday in California, everyone is out driving the coast. It’s been nut to butt the whole way. A great exercise in patience that I’m close to failing.

I had no idea where in California the Hearst Castle was because I’d never really cared. All I knew is that my parents went there a year or so ago and I remember they did several tours. As I’m riding down the road I see a sign that says Hearst Castle 1/4 mile ahead. What?! Really? Well, I needed a break so I stopped. I didn’t have any idea what to expect. I meandered up to the ticket window and the guy frantically asked me if I wanted to do the tour. I said sure, why not. So he screams into a radio for them to hold the bus. Apparently the last bus leaves to go to the house at 4:30. It was 4:30. Lucky me. It was interesting. Very grandiose and gaudy. But hey, if you’ve got it, flaunt it. Maybe when you die people will come tour your house someday. The architecture really was amazing. Especially the pools and the ceilings. I thought it was crazy that he’d acquired so many historical artifacts. Our tour guide was a robot who thought she was funny. I couldn’t wait to get out of there. 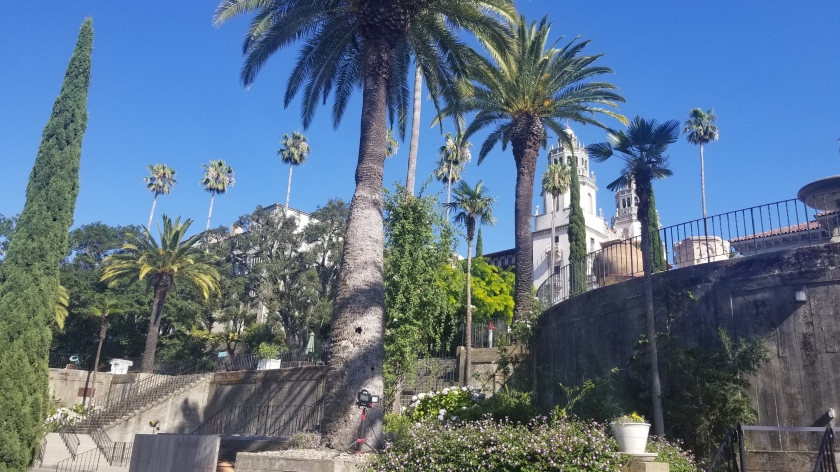 And of course, what is a day without an adventure. I’ve found that being on a trip like mine where everything is up in the air until the last second is nearly impossible on the West coast and it’s getting harder the farther south I go. I tried, physically, to get a spot at 4 different campgrounds. I called 6 others. All full. I finally took one guys word for it that you could camp on the beach in a certain area. 6 miles out of my way later, I found the beach lined with signs saying that camping on the beach would incur a $250 fine. I decided that tonight would have to be a hotel night. Bad idea. Friday night, the coast, the beaches. That meant everything was booked solid. I did find a few rooms on an app, the cheapest was $400. Nope.

I got back on the bike and rode for another half an hour. I kept searching and finally found the place I’m in for half that. Still. Damn. The payoff though is that about 15 minutes out, the temperature dropped 15 degrees and it started raining. I guess it’s a good night for a hotel.

The deal is, that didn’t help me not feel burned out. I’m now in southern California, the ultimate in urban sprawl. And it’s the weekend. The likelihood of me getting anywhere to camp the next two nights is zilch. I also can’t spend two more nights in hotels.

It is starting to look like a really good call to just head 540 miles due east from here which will have me home by tomorrow night.

What do you all think?

I don’t feel like I’m missing any part of highway 1 that shouldn’t be missed.

I’ve done what I set out to do.

5 thoughts on “I’m finally burned out”