The rain I was so worried about last night never materialized. I never sleep comfortably in the tent but my sleeping pill did a decent enough job last night that I don’t remember much. That’s a good thing.

After packing up and getting a quick bite to eat, I headed over to the Yorktown battlefield. I was early so I killed a bit of time examining the cannons nearby. It’s always mildly depressing to learn that what is on display is a reproduction because the original was destroyed. Rereading that, I should clarify. The cannons are real. The earthworks of the battlefield are not. I took a guided tour and then took a driving tour by myself on the bike.

I should mention a struggle I had today. I hate hands off parents and their horribly behaved children. A single guy was there with his two kids. Maybe 7 and 5. They would not shut up. From the movie at the beginning, through the ranger walk, these kids were loud. They were obnoxious. The young boy was on a leash. Literally. It didn’t matter, he did what he wanted and if he pulled the leash tight, he’d just lean into it and jump and yell until his dad relented and followed him. The older daughter was so loud and constantly talking and interrupting the ranger that all of the other patrons were visibly annoyed.

I can’t stand chaos around me. Yes, it’s a major trigger. I get very angry, very quickly. That reaction to chaos is why I have to separate myself from my own kids regularly. I have a level of control over that though and my kids understand when they’ve set me off. We can talk about it.

When it’s someone else’s kids my only recourse is to leave. And I wasn’t leaving. I really wanted to say something. In the past I would have. I’m not shy about it. I don’t really want to count it as a personal victory as it took everything I had to not say anything. The only thing that calmed me down was to get back on the bike and ride the tour. It took awhile.

Something as simple as bad kids and a bad parent can be the end of my day. I don’t want that to be what I remember about Yorktown. Perhaps now that I’ve dumped that feeling out in the open, I can move on.

After lunch at Yorktown Pub, over looking the Chesapeake, I rode a mile to the Revolutionary War Museum. As with the WW2 museum in New Orleans, there wasn’t much there that I hadn’t heard or read before. What I really enjoyed was going outside to the living history exhibit. There, I had a long conversation with a gentleman who was portraying a Patriot Soldier. He was prior service Navy and retired the same rank I did. We spent a lot of time comparing similarities between what Revolutionary Soldiers did and the way they lived to modern Soldiers. They had an engineering device called a Gabion which is essentially a bottomless basket woven from sticks and branches. It is meant to shore up earthworks when filled with dirt. It is exactly the same concept as the thousands of Hesco bastions I installed during my first tour in Iraq. Ours were just made out of wire and a kevlar type cloth. 250 years and infinitely better technology and we are still not that far removed.

I hoped back on the bike and put in 180 miles to get to Manassas and my cousins home.

A guy in a car nearly killed me today. He threw on his signal (actually impressed by that) and immediately changed lanes into me. He never looked, he didn’t ease over. He just did it. And forced me right off the road, into a grassy median at 65mph. It was everything I could do to get it back on the road. I may have been a little amped up after that. Besides wanting to drag the guy out of his car and violently end his life, I surprised myself with the thought that I wish I could just pull over and talk with him. Explain to him what he did, what almost happened. What I was doing and who I was. That I mattered and that there were people at home who wanted me to return (I think.) That, by his inattentiveness, he could have ruined it all.

I thought about that for about 30 miles and it served to calm me down. Not sure how or why yet.

Tonight is the first at my cousins house. She has a beautiful, perfect family and her husband is one of the most fun guys to be around. Her boys and I have already bonded over snakes and bugs and horrible camping stories. I think I’m in good hands. 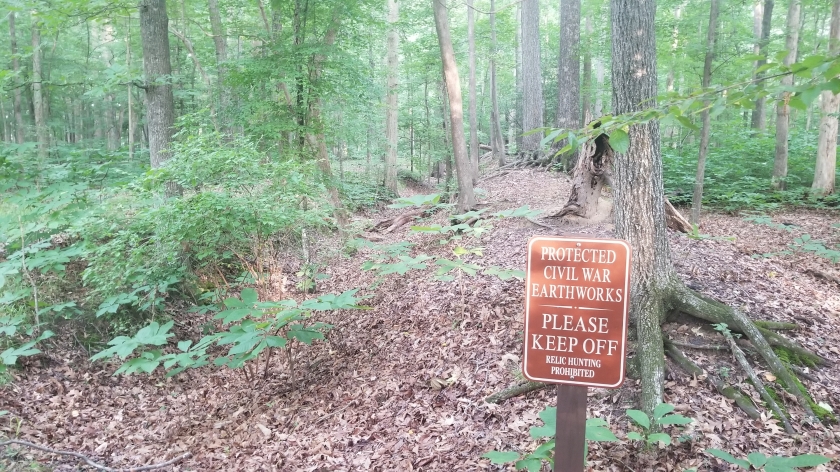 My campsite last night was 20 feet from civil war earthworks. I had no idea until this morning.

Two of the many cannon. Artillery is the Princess of battle right?

A Gabion on display in the museum. 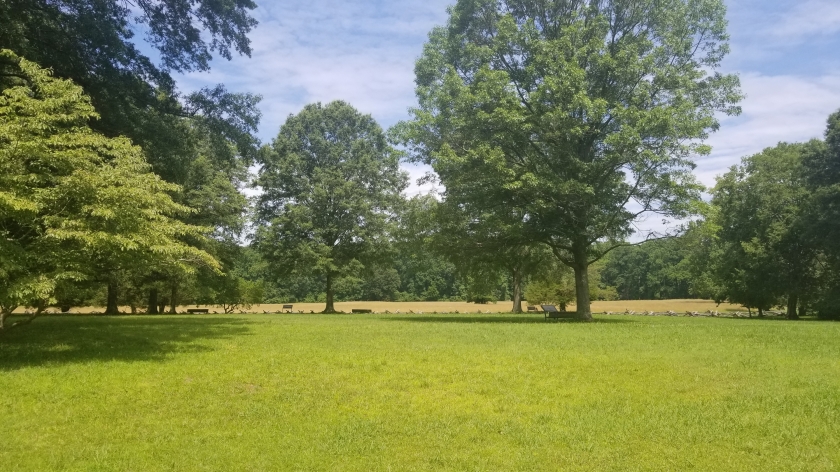 The field and road (behind the low fenceline) where the British surrender took place.

Though the battle of Yorktown took place two years before the official end of the war, it was the last major battle on American soil and signaled the end for the British occupation.

7 thoughts on “My last family stop.”