I left my campsite in Dearborn Michigan at about 7:30am.

It was interesting to be going the opposite direction of the morning traffic. I was near the GM proving grounds and they have a plant just a bit further up the road in Flint. That means nearly every car I passed was something from the GM family. Like a weird episode in the twilight zone.

I stayed on the freeway for 258 miles, which took me all of the way to Mackinaw city and the Mackinac Bridge.

Before I ever left, I was discussing this trip with a good friend who is a very experienced motorcyclist. The first thing she suggested was to find a way to go over the M.B. so I did. A lot of my route planning for the great lakes region was designed around getting me to the bridge.

On the way there I passed the 45th parallel which is half way between the equator and the north pole. That was interesting.

I stopped in Mackinaw city for lunch and to take some pictures.

I told my friend I was here and she mentioned that I shouldn’t look down. So, of course I did. A lot.

Here’s the deal. The bridge was under construction which means everyone was going slowly. The deck of the bridge is metal grate. On a motorcycle I’m able to do something that people in cars can’t, and that is to look straight down. So I did. And woah. Crazy. I couldn’t do it long because I was still riding. That and it would instantly make you dizzy. It was only about 300 feet down. I loved it. 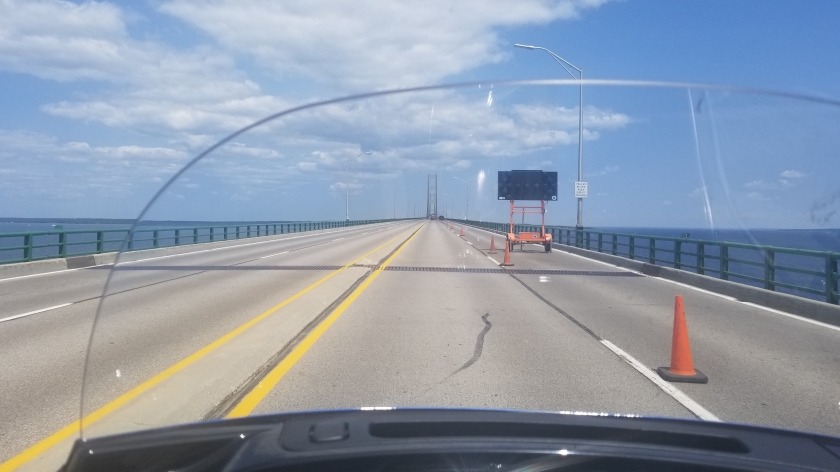 A few pics of the approach to the bridge proper.

After crossing the bridge I returned to back roads. Little did I know that on the Upper Peninsula, all of the roads are back roads. And they all had high speed limits. That, and not much traffic equaled a good time. I rode along the shorelines of both Lake Michigan and Lake Superior. The L.S. shoreline takes the cake for views. When I was on the interior roads, the scenery all looked the same but I was enjoying myself regardless.

As I was riding along I was trying to figure out where to stop. This area has a lot of camping options and so that made choices easy. I thought I wanted to at least get into Wisconsin but as I got closer the time zone changed. I was going to end up riding forever! I finally just called it a day and found an awesome campsite near a little lake outside of Crystal Falls Michigan. Which is where I am right now getting a pizza.

I feel good. Tired. But good. Today was my second longest day, behind the very first day which was probably over ambitious.

Everything feels good right now. At least as good as one can feel after a 500+ mile day on a motorcycle.

Bu the way, my wife is amazing. On the fourth of July, she, my kids, and a friend installed a sprinkler system in our yard. It ended up taking a few more days to get it all in and fine tune it but I am so amazed that she took that on. I think I need to leave more often.