As I’ve been riding, there have been so many things I’ve seen that are jaw dropping, awe inspiring and just humbling.

Today was my favorite.

I began with a ride through the rest of the Badlands NP. It was about 6am and I had the road all to myself. I watched the sun crest above the pillars and just soaked in the sunshine and the morning warmth. I could have taken a picture but sun pictures never work out so I just kept that one for myself.

I stopped for breakfast at Wall Drug in Wall ND. It was decent but a couple busloads of Chinese tourists came in right after I did so I didn’t stick around after I finished. Too crowded.

Next stop was Sturgis. It is beyond obvious that this town lives for one week a year. Everything, and I mean everything is geared towards motorcycles. Surprisingly it is a pretty town with a nice backdrop. I could see how living here would be appealing, if you could vacate the premises for that certain week.

Next stop was the town of Deadwood. As soon as you leave Sturgis and head towards Deadwood, you start climbing into the Black Hills. It is so beautiful here. It helped that temperatures were in the low 70’s and there were blue skies. But the hills and trees could hold their own in any landscape beauty pageant.

Unfortunately Deadwood has become commercialized. It is a unique town with a lot of old buildings. It would take time that I didn’t want to devote in order to really see it all. Maybe someday I’ll come back with my wife and family and we’ll explore.

I pulled up to Rushmore and the tourist nightmare began. I did the same thing I did at Niagara Falls. I parked, walked quickly to a vantage point, took and couple pictures and left just as quickly. 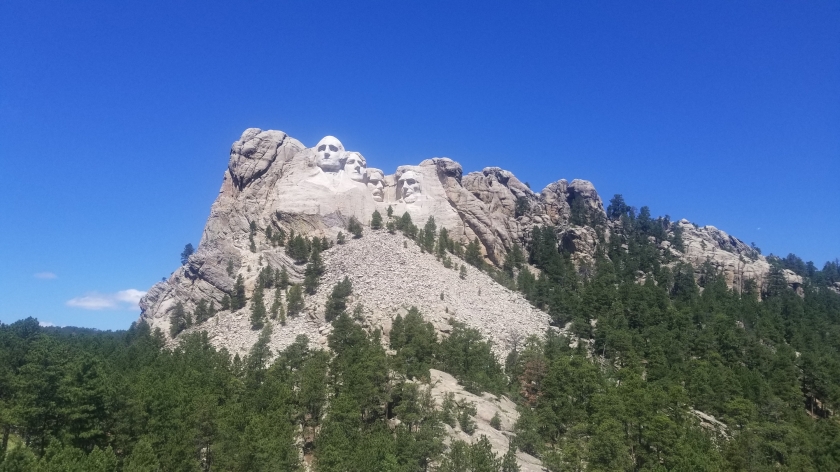 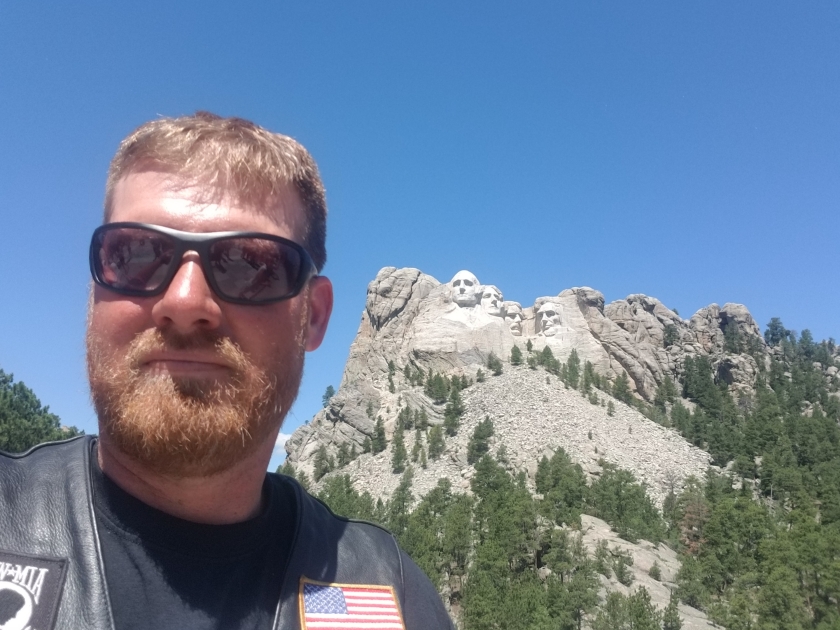 Now the real adventure in riding began. The road became very narrow. It was relatively slow going but the road wound around, back and forth, switchbacks and even corkscrews. Yes, corkscrews. The road would do a tight curve in a narrow area and it would go under a wooden bridge, which you would end up on just a second later, going over where you had just been. It would then turn again along the mountain and keep going up. It’s hard to describe. At several points the road would go through a single vehicle width tunnel and drivers would just play chicken with each other to see who got to go first. At other times the road would separate between the two lanes with no line of sight between them.

As I rode through Custer State Park, I ran into several Buffalo. It’s definitely not the first time I’ve seen buffalo, not even the first time I’ve seen them while riding a Harley. Each time though it’s a neat experience. Especially when a bull is right in the road and won’t move. I didn’t get a picture of him because I kept my hand on the throttle just in case. What I would do I don’t know. But it was just in case and it made me feel better. I did get this picture after he moved on. And no Tim, I didn’t rev the engine. 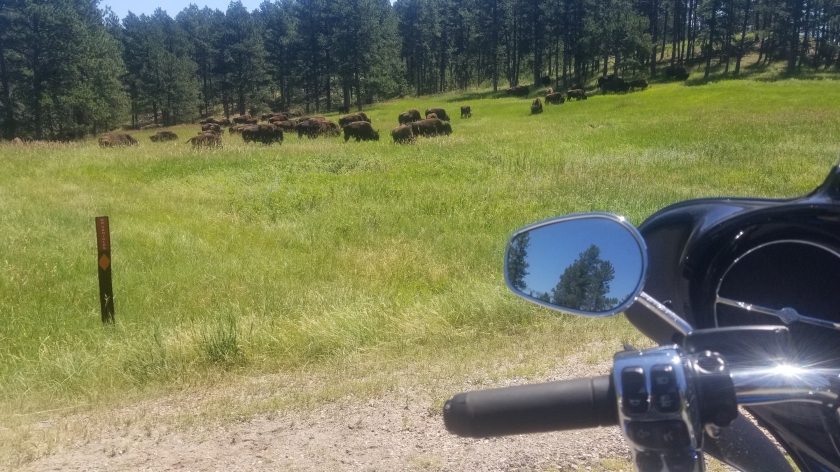 I also got these pictures at an overlook, looking back on Rushmore. It is in the distance. You may have to zoom in. 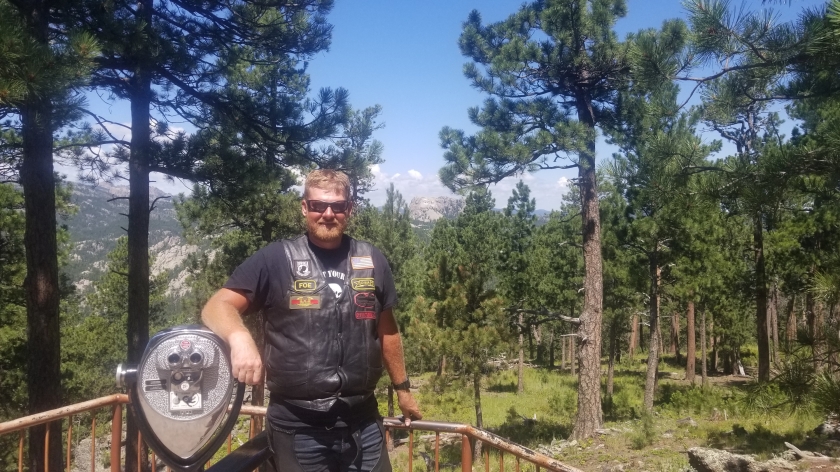 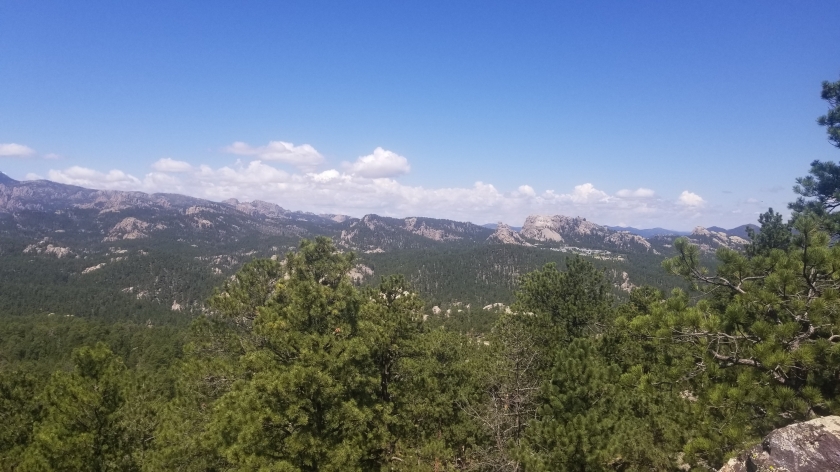 The next road was called “the needles” highway as it wound in and out of tall black spires that must be the needles. There was even a short section that went through a somewhat natural gap widened to be a tunnel. 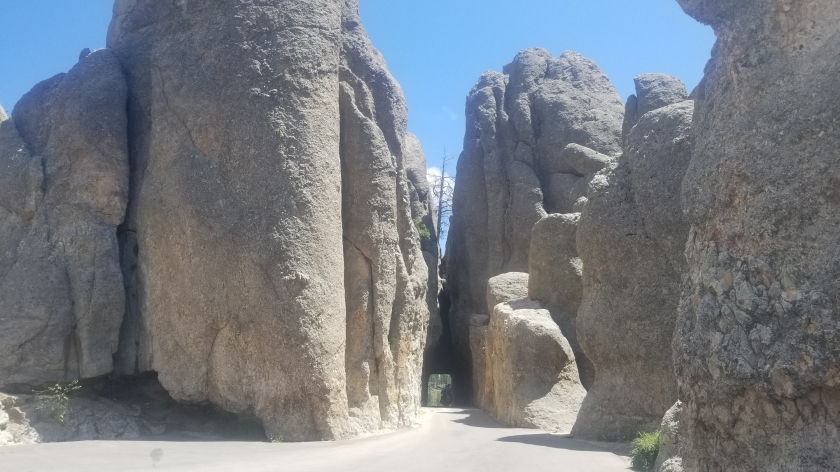 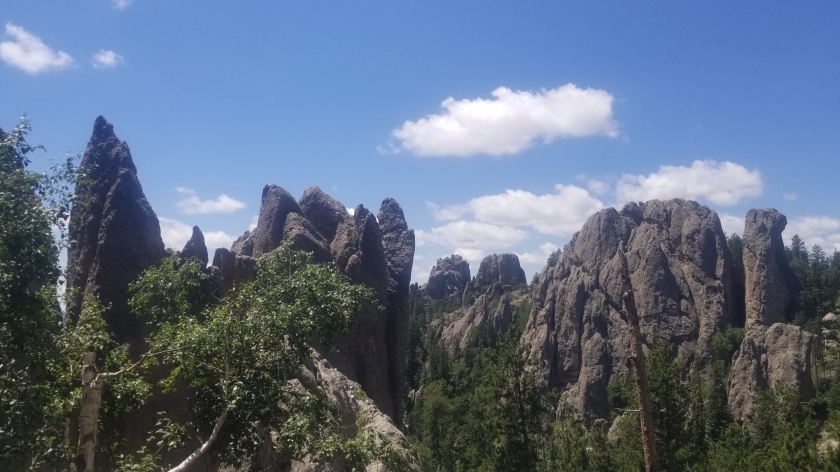 After all of that amazing riding, I turned onto a much straighter piece of road and made a quick stop at the Crazy Horse Memorial. I remembered watching something about this on TV a long time ago. I was surprised to see…that it hasn’t changed. Are they working on it? I don’t know but they did charge me $7 to see this…and that’s as close as you can get. 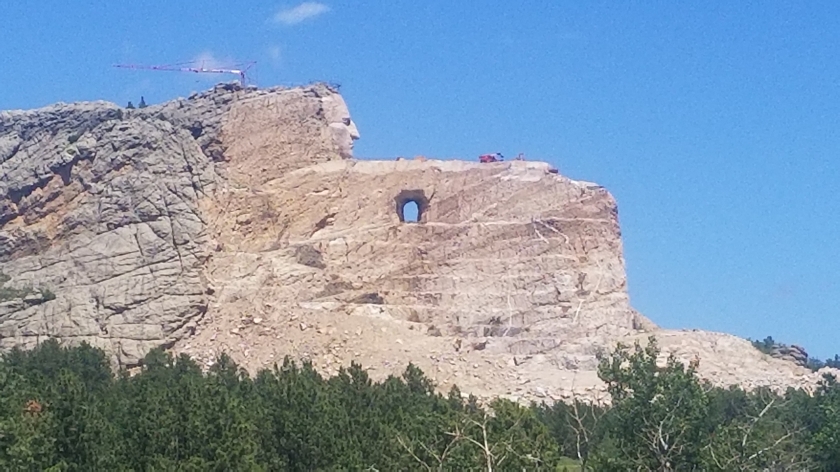 I stopped in for lunch in Custer and then resumed my trip across South Dakota. It didn’t take long before I was in Wyoming.

Wyoming is home to me. My family can trace its roots pretty far back in this State. I breathed in with a big smile as I crossed the State line. Beautiful rolling hills and the foothills of the Black Hills were my companions as I turned north towards Devils Tower.

Just wow. Seeing pictures of the tower will never do it justice. The immensity, the striations and the colors can hold you in a trance as you just stare at it.

Which is what I have been doing for the last while during the time I wrote this post. This has been my view. 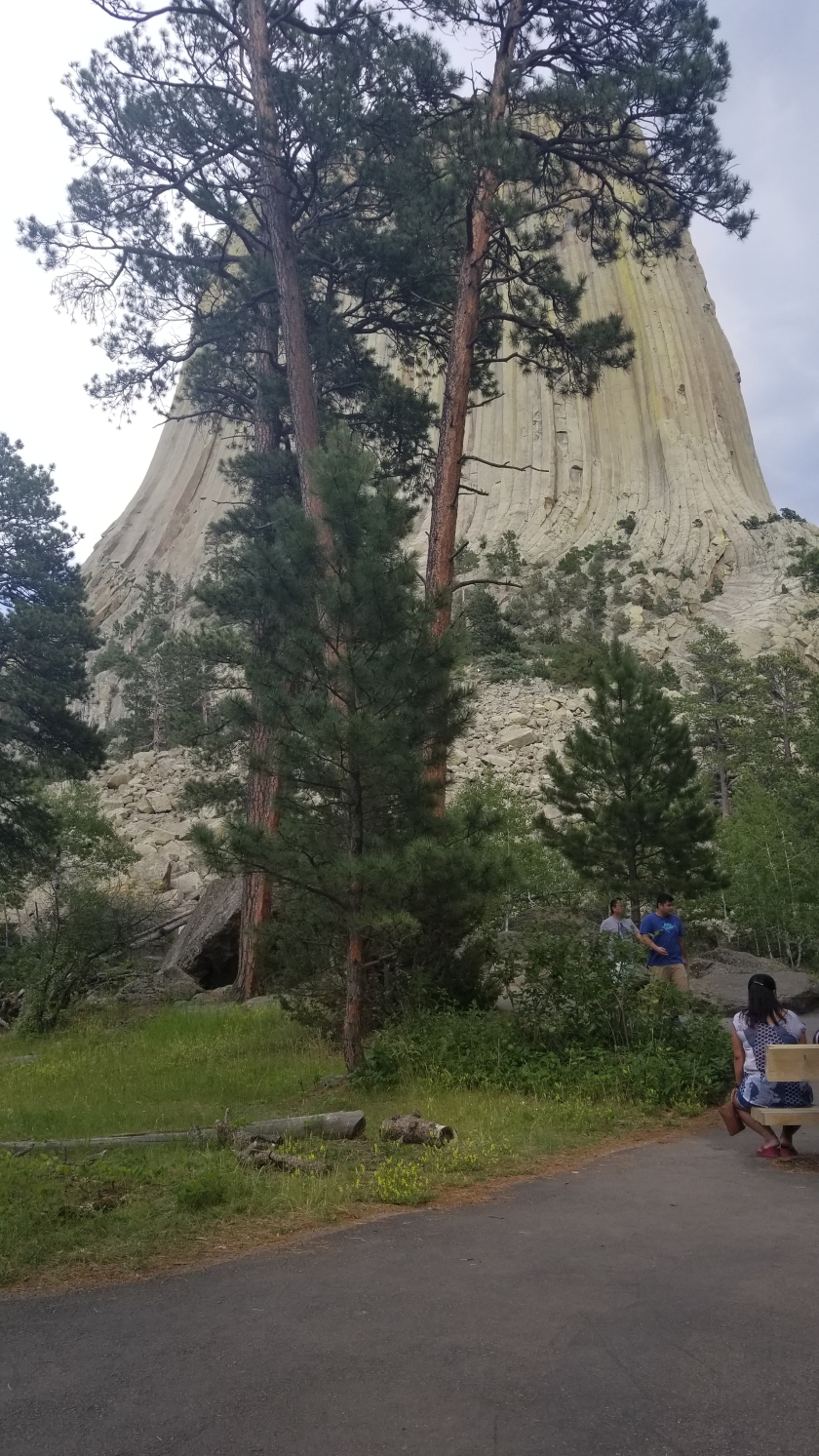 Yeah, I know, the tree is in the way. Just wait. I will be camping here at the base of the tower. There wasn’t any internet service in camp and I discovered that there is here, in this exact spot. 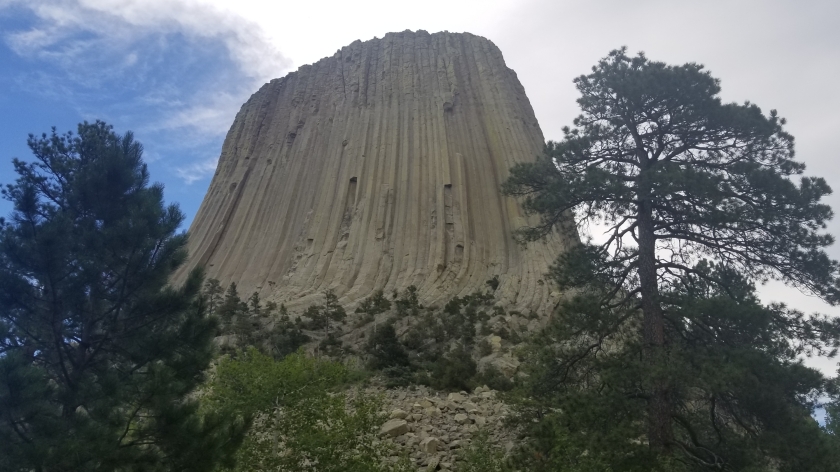 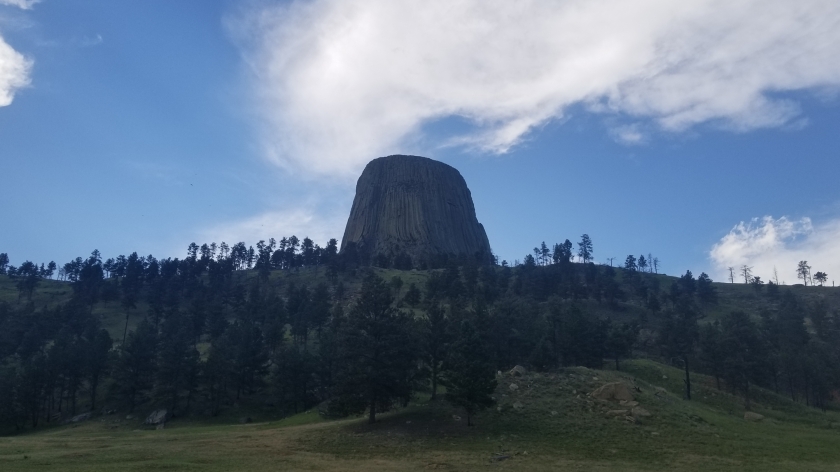 Here’s a picture of a prairie dog that I got for my kids. They are all over the place. 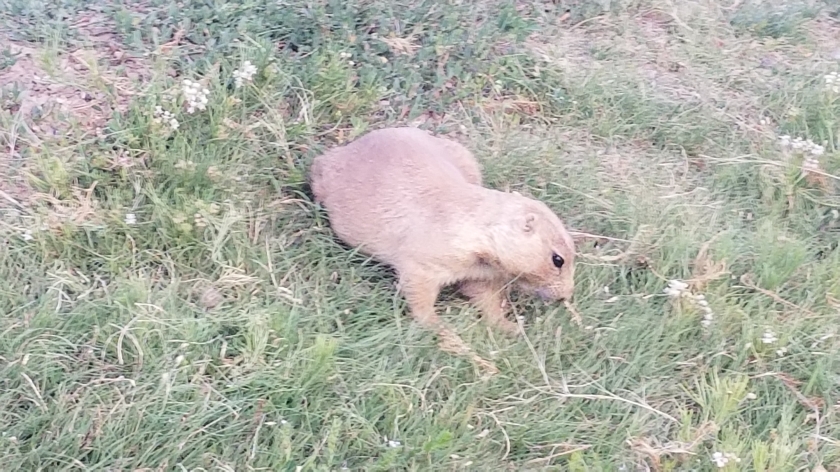 Big thanks again to everyone helping out. I really appreciate it.

Today was a great day of riding and of sightseeing. Definitely in the running for my favorite day so far.

I’m looking forward to tomorrow as well but it’s mostly a point A to point B day.

One thing worth noting. No negative thoughts today. That’s a plus. Now that I’ve said that, I’m screwed.

7 thoughts on “An amazing world”