I woke up this morning to the sounds of a large family already awake and cooking breakfast. It was just past 7am.

I was happy to get up and moving because it had been a little cold over night. As I began packing up, I heard a voice ask if I’d like some coffee. I realized she was talking to me and so I consented. Happily. I even tried to show it on my face. After I was presented the cup she asked if I’d also like to join them for breakfast. Rather than making an excuse as to why I couldn’t, I smiled and said yes, of course. I had an amazing, camp stove prepared breakfast of blueberry and chocolate chip pancakes, scrambled eggs, turkey sausage and banana bread. It was so good and the perfect way to start the day. I was also able to chat with about ten new friends as we ate. I am so grateful for their generosity. Thank you!

I rolled out close to 9am. For the first time in days, I saw blue skies in the morning. It was about 64 degrees and would stay that temperature for the whole time I was along the coast.

I will say this, the coast of Oregon is infinitely more amazing and stunningly beautiful than the coast of Washington. Hands down.

I made it to the town of Tillamook and stopped in for a self guided tour of the cheese factory. It was fascinating and I’m glad I took the time to do it. The only negative was that I couldn’t buy any cheese because I had no way to keep it.

I did get two pepperoni sticks and a bag of raspberry licorice. Yeah. It’s interesting at best.

After the creamery I went across town to the air museum. It was kind of a let down. Oh well. They can’t all be winners. Hope they enjoy my $7.75

The next few hours were spent winding along the coast enjoying the views and the traffic. It wasn’t so bad in between the cities but once I was in a city, stop and go traffic would materialize. Just my luck to be here on a weekend.

I left the coast in Florence and took a left heading towards Eugene. The traffic wouldn’t have been so bad except for the inevitable driver who just refuses to go the speed limit and gets everyone backed up behind them. When I could finally get around, the roads were great.

I grabbed a poker chip in Eugene and then took back highway 126 towards the mountains. Traffic had really thinned out and it was fun cruising along this road. I was having a great time.

Just after the town of McKenzie River, I left 126 and got onto 242, otherwise known as the McKenzie Pass Scenic Byway.

This road is now the best road I’ve ridden this entire trip. And I pretty much had it all to myself. I made my Harley pretend to be a sport bike. There were curves, tight and open. Banked and flat. Winding hills. Beautiful tall trees. Rock formations. Mountains. Volcanoes. Basalt formations. Views for days. 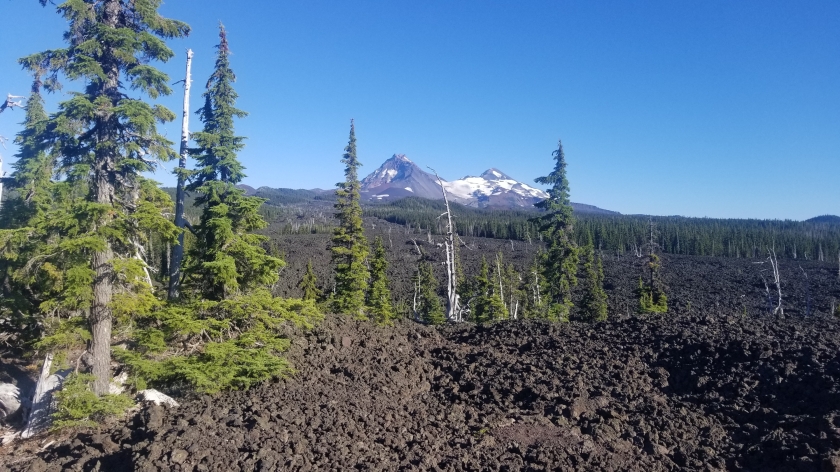 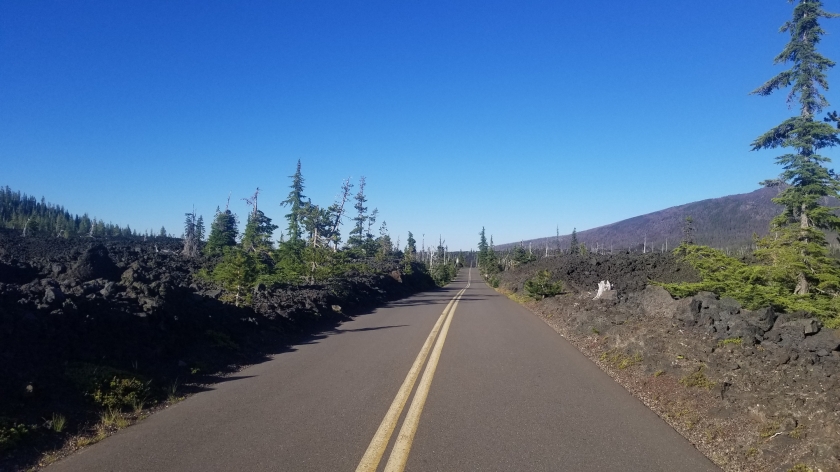 The pictures were taken after most of the winding road was over with, at least on the way up. I just hadn’t wanted to stop riding in order to take pictures. Don’t worry, I did stop to take these, and yes, right in the middle of the road. Like I said, all to myself.

The best part about today is that the whole reason I was going to Bend is that a good friend lives there who I haven’t seen in forever. Yep, me dropping the ball again. I’m trying to make up for that.

He looks exactly the same, hasn’t aged a bit. His wife and kids were great to meet as well. He is very happy and that makes me happy. He has a good life here. We sat out on his porch until 11pm chatting about everything. I get to stay here tonight and maybe even tomorrow night. I’m looking forward to catching as much as possible. Plus, I really want to check out Bend. It was on our list of possible places to live a couple of years ago and I want to see what I’m missing out on.

Another good day and I’m happy.

Is this really working?

5 thoughts on “Another wonderful day”