Then I won’t be disappointed. I had hoped to get well past Gettysburg today. But then I also wanted to really tour the battlefield and not regret missing anything.

I rode through Harpers Ferry today and toured the town. Not very in depth but I need to be fine with that.

I then went and rode through the Antietam battlefield. Also not in depth.

I picked up a chip at the new worst Harley dealer yet (Roanoke was the previous record holder) in Williamsport Maryland. The place is in an industrial park and is a joke. The staff takes the cake for being rude. Their only redeeming quality is that they had a color of poker chip I’d never seen before. The poker chips are still cool mementos so it was worth it, if only just to publicly bash them. I hope they’re following and I make them cry a little.

On to Gettysburg. Just getting to the visitors center is an adventure and you pass a hundred monuments. That’s not a joke. This is huge battlefield and so far rivals Vicksburg for number of monuments. I’ll bet Gettysburg has more.

I wanted a good tour, someone to be speaking and explaining everything so I wasn’t just riding blind. Unfortunately I missed the last tour by less than an hour. The lady behind the ticket counter asked if I’d be here tomorrow. Well, why not. Ok. Now I’m all set for a bus tour at 10am and I’ll be camping at a resort near the battlefield for an exorbitant amount of money to just pitch a tent. I stuck around, saw the movie and the cyclorama (Google it, I didn’t know either) and toured the museum. It has a ton of artifacts that I love. So interesting.

I’ve set up my tent for the night, minus the rain fly for the very first time because there isn’t any rain in the forecast, which means I’m going to get poured on and regret that decision.

Eating dinner at the local brew pub. Someone please explain to me why nachos (huge, for about 4 people) are always on the appetizer menu? Have any of you ever ordered nachos as an appetizer? I just order them all for myself and then I’m done. Restaurants are just weird.

I guess today was a better day. I got some mileage in during good weather and I should be happy. Should be. I haven’t decided yet. I still feel like I’m just getting by.

I’m here in Gettysburg then until at least noon tomorrow and then I’ll move on to Philadelphia where I’ll be stuck again. Yay.

Why don’t I just pack it all in and head west? I don’t want an answer to that.

I won’t quit yet. I really want to get to the west coast, especially the Seattle area. I have big plans there. Already in the works. I miss my friends there. It’s been 20 years. At least. 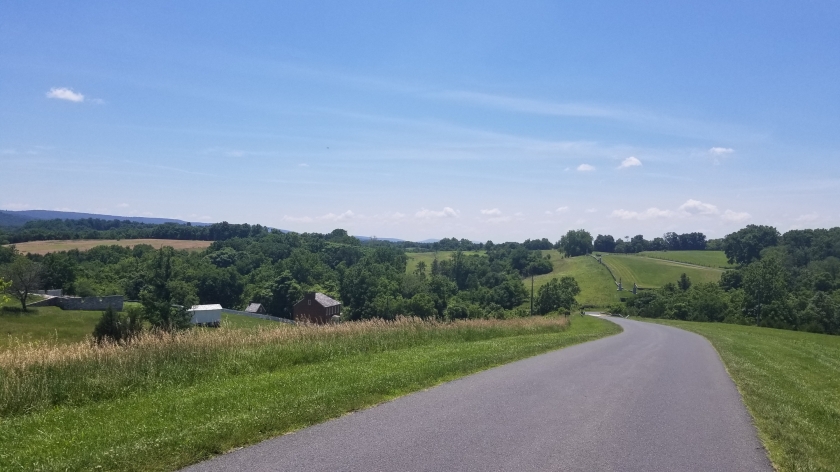 Three images from the actual cyclorama. Not a copy. Very amazing.

The most expensive campsite yet.

6 thoughts on “Need to lower expectations”